Shriners Hospitals for Children is a network made up of 22 facilities across North America that help “children with orthopedic conditions, burns, spinal cord injuries, and cleft lip and palate” receive care despite their parents’ ability to pay. They help “kids be kids.
Hospital Wish List

Interested in Becoming a Shriner?
Membership Application for Kismet Shrine

Shriners believe in God and that he created man to serve his purpose, among which is service to others in his name.

We believe that care for the less fortunate, especially children who suffer from burns and crippling diseases, is our institutional calling.

We are patriots, each willing to serve his country with fidelity and courage.

We cherish independence under law and freedom with responsibility.

We honor family. We respect our parents, wives and children. We should instill in our children the tenets of this creed and the heritage from which it emanates.

As individuals we pledge ourselves to integrity, virtue and nobility of character. Our intentions will be honorable, our relations will be trustworthy and our spirits forgiving of each other.

As brothers we offer each other fraternal affection and respect.

Together we will support each other in adherence to this creed, so that we and our communities will be the better because of our fraternity and it’s principles.

As Shriners we look beyond ourselves to serve the needs of others, especially children who cannot help themselves.

We believe Shriners Hospitals to be the world’s greatest philanthropy, and we covenant with each other to support it’s “temples of mercy” with spirit, time, talent and means.

The photo known as the “Editorial Without Words” is probably one of the best recognized symbols of Shriners Hospitals, yet it was taken almost by accident. Randy Dieter, the photographer, recalled that in 1970, he had been on assignment covering Hadi Temple’s annual outing for handicapped children at the now-defunct Mesker Amusement Park in Evansville, Indiana.

“I was taking shots of the midway and was using my telephoto lens,” Dieter said. “I saw a local Shriner walking by carrying a little girl in one hand and her crutches in the other. My camera wouldn’t fire. Then they were too close for my lens. I ran past them, but the camera jammed. I had to take my last shot as they walked by. It was the end of the roll. If I had to think about it, I wouldn’t have come up with something like that. Fate guides you.”

“It still seems unreal,” said Bobbi Jo Wright, the little girl in the photo. “I have many wonderful memories of the years I was a patient at the St. Louis Shriners Hospital and remember all the fun activities. I was born with cerebral palsy, which resulted in many orthopedic problems that made walking difficult. I had many surgeries at the St. Louis Hospital. They greatly improved my ability to walk.”

Bobbi Jo received her B.A. in English from Anderson University. She is active in her church and teaches Sunday School. “I use a cane when I go shopping,” she said. “If I’m walking on grassy areas, I use crutches.”

Today, the famous photo is an integral part of the Shriners Hospitals logo, and has been reproduced on stained-glass windows, mosaics, tie tacs, pins, and in statues. A larger-than-life replica of the “Editorial Without Words” stands outside the International Shrine Headquarters building in Tampa. Photographer Randy Dieter presently serves as graphics editor for the Kentucky Post.

Noble Albert Lanier Hortman, the man in the photo carrying Bobbi Jo, passed away on December 6, 2009, two months shy of his 81st birthday. He lived a full life and was one of the fortunate ones to make a place in history that will live in time immemorial. 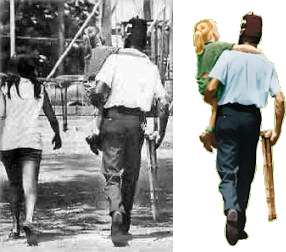